The Growing Use of Renewable Energy in the US

According to the EPA, burning fossil fuels for electricity production makes up about a quarter of total U.S. greenhouse gas emissions. Approximately, 62% of our electricity comes from burning fossil fuels, producing large quantities of carbon dioxide, resulting in heat being trapped in our atmosphere. Renewable energy sources are the best alternative to reducing the negative externalities associated with deriving most of our electric power from non-renewable sources.

The demand for renewables has increased in the past year despite the pandemic. Renewables were the only energy source for which demand increased in 2020 reaching its highest levels to date. Wind energy has become the single most-consumed source of renewable energy on an annual basis accounting for roughly 26% of U.S. renewable energy consumption in 2020. Last year U.S. wind energy consumption grew 14% from 2019. The electricity generated by wind-powered turbines was nearly entirely consumed in the electric power sector, contributing to almost half the renewable energy used in the electric power sector at 43%. Hydropower was also almost entirely consumed by the power electric grid. On the other hand, solar energy accounted for about 11% of U.S. renewable energy consumption in 2020. Most of the solar energy was consumed at a residential and commercial level. Overall, 2020 U.S. solar consumption increased 22% from 2019. According to a report released by Solar Energy Industries Association and Wood Mackenzie, solar installations grew 43% year over year, reaching a record 19.2 gigawatts of new capacity.

Looking more closely at wind energy in the United States, according to the IEA, onshore additions are expected to decline this year due to many projects eligible for full tax credits that were commissioned in 2020, reducing the project outlook for 2021 and 2022. Approval of the new proposal for a longer-term tax credit extension would most likely boost growth beyond 2023. Thus, long-term expansion of wind power and infrastructure is expected. 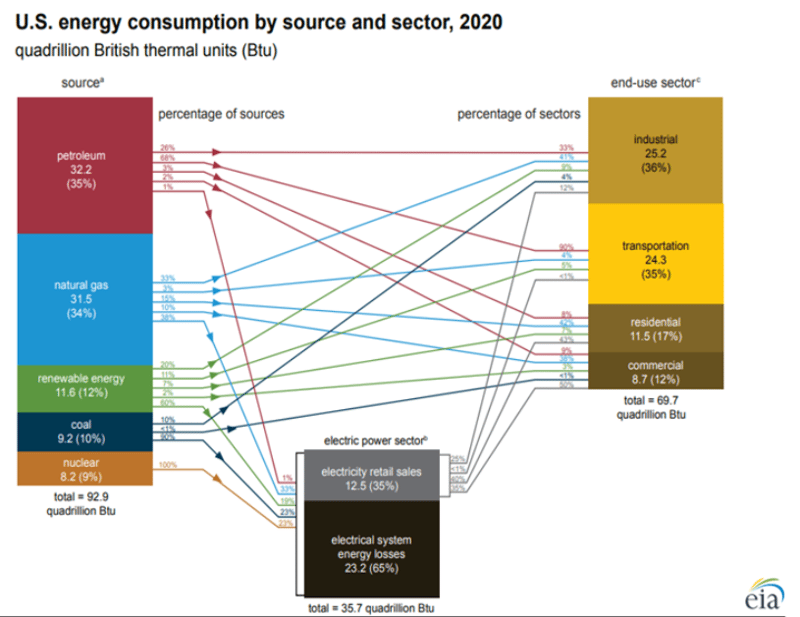 Renewable growth is expected to continue throughout 2021 as the new administration starts to implement green initiatives such as rejoining the Paris Climate Accord, investing $2 trillion in clean energy, and fully decarbonizing the power sector by 2035 to achieve a larger goal of net-zero carbon emissions by 2050.

As mentioned earlier, most electricity production in the U.S. relies on burning fossil fuels. With the stance and commitment of the new administration on clean energy, the oil and gas industry will continue to face challenges. Demand patterns are continuing to change with the rise of the importance placed on environmental and social responsibility. The choice oil and gas companies make in the coming months regarding these trends and demand changes will have lasting impacts on the future of the industry.

Despite the advances in renewable energy, experts caution that a substantial gap persists between continued fossil fuel emissions and the lower levels needed to meet temperature limits in the Paris Agreement on climate change by the end of the decade. As the push towards reducing carbon emission grows, there must be a significant expansion of clean electricity to reach global net-zero goals. The IEA is calling on governments to invest more in the wind, solar, and other renewables, alongside the electrical grid infrastructure. In addition to having a positive impact on our environment, using more renewable energy can lower the prices of, and demand for, natural gas and coal by increasing competition and diversifying energy supplies.