Renewables have been headlining many news outlets especially with the Biden administration proposing the $2.3 trillion infrastructure proposal to achieve 100 percent carbon pollution-free electricity by 2035. As demand grows for renewables, so has the interest in businesses to go green. However, if you are a retail supplier, there are Renewables Portfolio Standards (RPS) that obligate each retail seller to supply a minimum percentage or amount of their retail load with eligible sources of renewable energy. Renewable energy is energy that comes from resources that cannot be depleted or those that constantly replenish over time such as wind, solar, ocean, hydropower, biomass energy, hydrogen, and geothermal power. It's important to note that the required amount of renewables in your portfolio can also vary depending on the market. This is especially important for suppliers since this could mean major penalties for those suppliers who do not meet their state's requirements.

Retail suppliers can meet their renewable energy obligations by purchasing what are called renewable energy certificates or RECs. A REC is an accepted market-based legal instrument through which renewable energy generation and use claims are substantiated in the U.S. renewable energy market. It is important to note, that RECs are not controlled by one organization or group, but a part of the US electricity market to demonstrate compliance with renewable markets. According to the EPA, RECs were created to help convey the attributes of electricity generated from renewable resources to buyers. Analogous to the utility delivering the physical electricity through wires, RECs serve as the means to deliver the environmental and non-power attributes of renewable electricity generation to buyers—separate from the physical electricity,” and as such, “RECs are increasingly seen as the ‘currency’ of renewable electricity and green power markets.” In The Renewables Portfolio Standard, a retailer can satisfy their REC obligation by either (a) owning a renewable energy facility and producing its own power, or (b) purchasing power from someone else's facility. For option (b), the retail supplier can purchase RECs directly from renewable energy generators, a REC trading market, or from a REC broker. 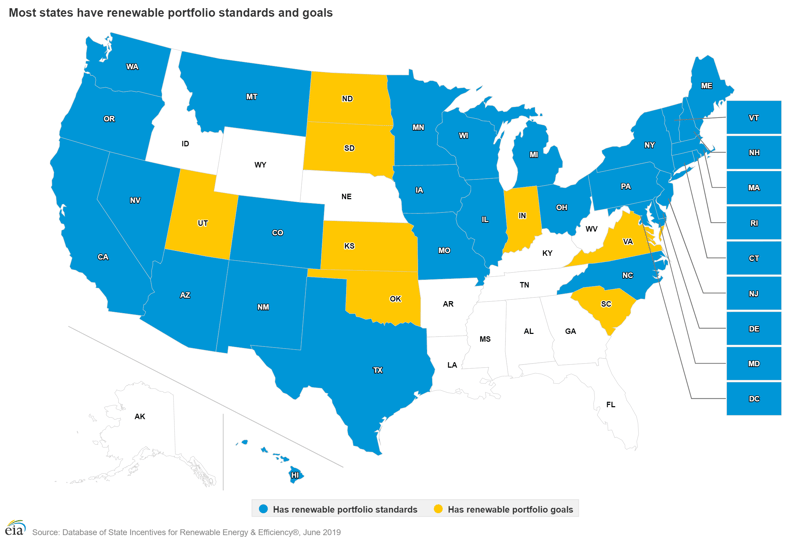 On average, state targets for RPS are around 10% and 45%, however, 14 states such as California, Colorado, Hawaii, Maine, Maryland, Massachusetts, Nevada, New Mexico, New Jersey, New York, Oregon, Vermont, Virginia, Washington, as well as Washington, D.C. Puerto Rico, and the Virgin Islands have requirements of 50% or greater. As an example, if the state's goal is 7 percent, the obligated entities (i.e. retail sellers, default suppliers, municipal and cooperative utilities, and large self-generators) together supply 100 percent of the state's electricity consumption and the size of each entity's obligation also will be 7 percent. According to the Berkeley Lab, the RPS compliance costs across states reflect differences in RPS target levels, resource tiering/mix, local RE costs/characteristics, REC prices, the balance between short- and long-term procurement instruments, reliance on pre-existing resources, wholesale electricity prices and state-specific cost calculation methods - data TRUELight Energy offers. Fortunately, each state should allow for what is called a true-up period which provides flexibility and allow retailers to use generation that it procures during the true-up period for compliance in the previous year.  A successful portfolio for retail suppliers requires adequate RECs according to their market entrance, let TRUELight Energy guide you through accurately capturing your pricing model to include the various data components.